I think I have worked out how to create the necessary balance to permit the British pickets to take on the massive Russian forces prior to the deployment of the main elements of the 2nd Division:

1. The pickets will be classed as skirmishers, that is to say they will be in open order and will make use of cover where possible.
2. The pickets will be classed as in soft cover when receiving fire - I am assuming that they would kneel or lie down and maybe utilise some protective scrapes in the ground. Those in the Sandbag Battery and behind the Barrier will be in hard cover.
3. The pickets can both move and fire during a game move.
4. Due to the steep slopes, massed formations and uneven terrain, including scrub, the Russians move at 50% of their normal move rate.
5. The Russian infantry represent a close order dense target.
6. The Russians will be firing at targets uphill while in the ravines and this will reduce the effectiveness of their fire, also, only their skirmishers and those in the front ranks will be able to fire. Once they have fired, those in the columns will not be able to fire again, unless the column stops while they reload.

The above modifiers should give the pickets a fair chance of surviving to achieve the effect noted in the real battle.

Here is an image of the table with the initial troop deployments. The Russians are at the top, while the pickets are deployed in an arc across the high ground: 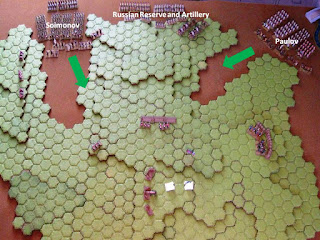