Having had a go at recreating the Battles of The Alma and Balaclava, the next major action in the Crimea would be the Battle of Inkerman. I have been working up to this for many months, slowed down by a number of factors, including a lack of Russian infantry and, more problematic, how to design the terrain. I have already had several attempts. At first I tried out foam board hills as per my Balaclava action - this did not work at all. I then contemplated building the battlefield using layers of expanded polystyrene - again this was not very successful. I then saw on Bob Cordery's Wargaming Miscellany website a battle fought over hexagons made from a clip together game called ' Heroscape'. I had some of this stuff bought for a 15mm project never started. All of my previous ideas were tied to using the 45mm (or so) hexagons, but what if they are ignored and the terrain is simply used to form ridges and ravines. So after a bit of experimenting I have come up with a battlefield that looks reasonable, especially after the hexagons were given a splash of green paint.

The table is 6 x 4 feet and I think it will work with my 20mm figures. Here is the battlefield before any troops are deployed: 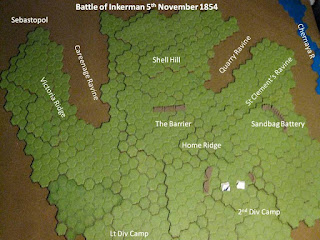 Sorting out the terrain is one thing, but designing the game to reflect the actual battle is another. There are some tricky issues:
1. The battlefield was shrouded in mist and how to manage the detection of the Russians by the allies
2. How do small pickets take on large numbers of Russian columns effectively on the wargame table?
3. How to reflect the command and control challenges.
4. How to represent the reinforcement of the allies.
5. The use of Russian naval artillery.

All of the above will need to be worked ou, although I have some advanced ideast. The next step will be the troop ratios and their deployment. So far so good. This could be fun!!