This is an alternative scenario for the battle of Balaclava - the charge of the Heavy and Light Brigades did not happen, nor did the thin red line. Instead the Russians, having captured the Causeway Heights overlooking Balaclava harbour, decide to fortify their position by moving guns and infantry onto the ridge occupying three of the abandoned redoubts, supported by a mass of Cossacks and cavalry.

It is now the morning after; the 26th October 1854 and the allied command has decided to use infantry supported by cavalry to recapture the Causeway Heights, as the Russian presence threatens the rear and the key supply line from the harbour to the siege lines. Unable to release too many troops, Lord Raglan orders a half strength 4th Division to assault the Russian positions, supported by about half of the 1st Division, a Turkish Brigade and the Light Brigade.

An overview of the battlefield, the Light brigade on the left, with the 1st Division enetering the field, while the 4th Division moves towards the ridge with two of the occupied redoubts:

The game begins with the 4th Division deploying towards the ridge: 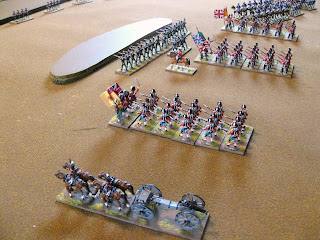 With the 1st Division hurrying down to support the attack: 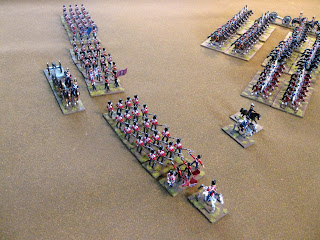 On the far left flank the Light brigade covers the mass of Russian Cossacks: 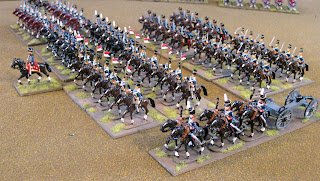 While on the allied right, the Turkish brigade deploys forward, supported by artillery and Turkish cavalry, towards their objective, Canrobert's Hill, which is held by artillery in a redoubt and some infantry: 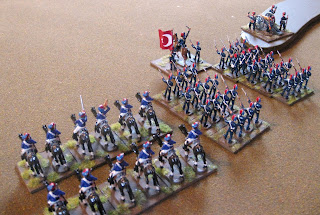 This where the action begins, with the Turkish infantry moving towards the hill and coming under fire from the Russian guns, initially with little effect: 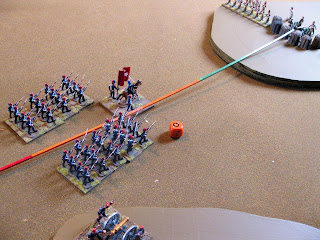 The Turks deploy into line and the Turkish artillery causes some casualties amongst the Russian infantry: 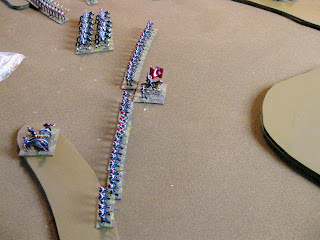 Meanwhile in the Centre the 4th Division begins its steady advance, screened by the Rifle Brigade, who begin a brisk fire fight with Russian Caucasian riflemen.  Initially the Russians have the upper hand and many of the British rifles fall: 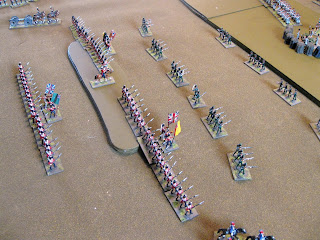 However, after several minutes and mounting British casualties a timely charge by the Turkish cavalry, routs the Russian skirmishers: 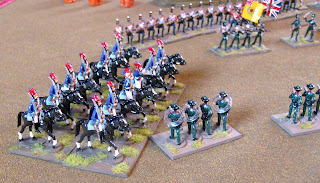 But, the Turkish cavalry over extend themselves and come under fire from guns in the redoubts and from Russian infantry -  they are cut down and the remnants rout from the field.

The brave Turkish action may have saved the Rifle Brigade, but it leaves the Allied right flank very exposed, with its only cavalry support eliminated.  The Russians spot an opportunity and their Hussars charge down the slope into the left hand Turkish battalion, almost at the same time the right battalion fails in an assault on Canrobert's Hill taking heavy losses. To add to the problem a Russian infantry battalion moves down in support. The allied right is severely threatened: 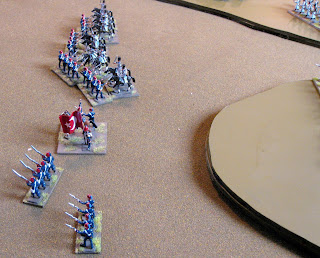 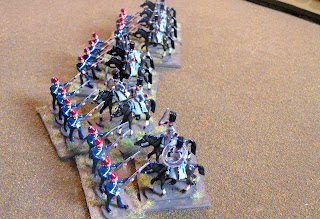 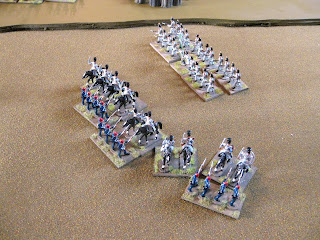 Over on the left flank the Light brigade advances to drive away the Cossacks, who threaten the deploying 1st Division.  The 17th Lancers, 13th Light Dragoons, supported by the 8th Hussars engage in a significant cavalry battle that rages on for the entire battle: 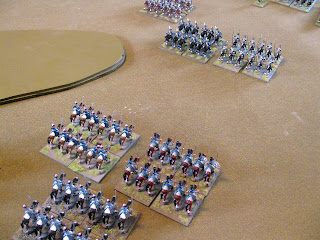 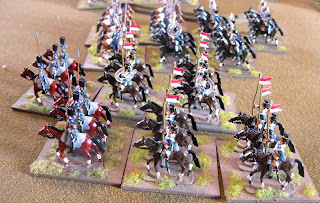 Eventually the British cavalry push two Regiments of Cossacks off the field, however a third attempts to outflank the Light Brigade, but is engaged with cannister by horse artillery and driven off by the 4th Light Dragoons: 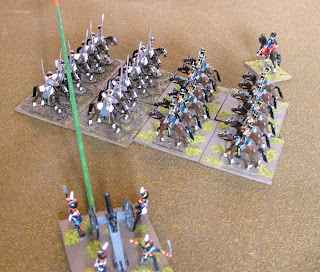 The action now turns back to the centre, with the 4th Division engaging the the Russian infantry at long range causing hundreds of Russian casualties. The Russians can do little as the British are out of range of their elderly muskets. They attempt a charge, but are mown down: 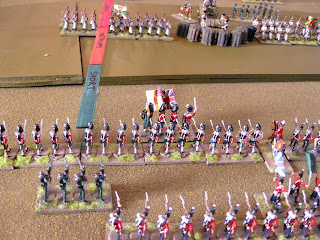 As this is going on the Guards of the 1st Division begin to turn the Russian flank: 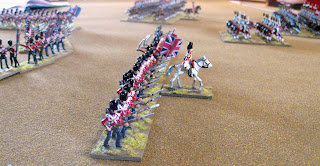 The Russian infantry collapses and retreats out of rifle range. Fearing the loss of the guns, the Russian commander orders the guns to be limbered up and withdrawn, and for the remaining infantry and cavalry to cover the withdrawal: 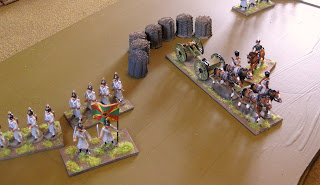 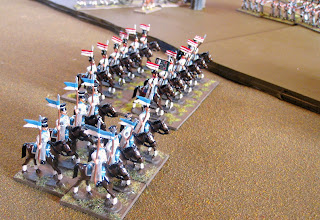 Over on the right flank the allies bolster up the remaining Turks, who somehow manage to hold on against the Russian hussars, despite heavy casualties. The remnants of the Rifle Brigade, the 11th Hussars and the 68th Foot deploy towards the right flank: 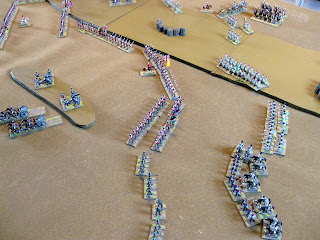 This is where we leave the alternate battle of Balaclava - the Light brigade did charge, but not down the north valley. The Russians were clearly driven off the Causeway Heights and thus, it was an Allied victory, although, if the remaining Turkish battalion had not hung on so long the Russians might have turned the Allied flank.  As always it is a lot of fun getting out my shiny Crimean toy soldiers!

An Allied victory, although it was a grave mistake to keep all of the British cavalry over on the left flank.