1809, in a surprise move Napoleon makes a thrust south deep into Austria. To counter this move, Archduke Charles rushes his army north to a steep sided valley, the Sneetal (all made up of course), in an attempt to block the French advance.  The Austrians position themselves astride the village of Klingenhofen, lying in the rolling floor of the valley.

We join the action on the third move, as the Austrians rush columns of troops forward to form a defence line:

View from the east, Klingenhofen village at the top, Austrians on the left: 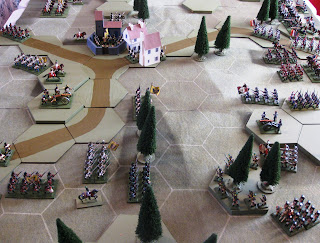 View from the west: 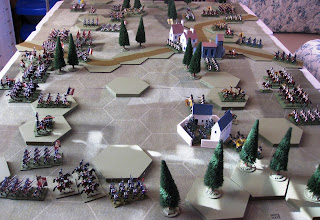 Napoleon surveys the field and determines that the village is heavily defended, so he decides to apply pressure to the Austrian flanks to draw off Austrian reserves, then if the flank attacks are unsuccessful, to push into the centre.

The action starts off on the Austrian right as French voltigeurs seize a wooded knoll to cover the advancing French columns. 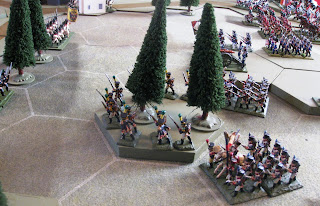 The Austrians counter with their Jaegers, who skirmish forward downing some of the French: 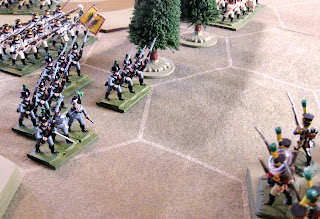 However, French fire from the knoll and artillery devastate the Jaegers, who break and retreat: As the skirmishing unfolds on the flank, the Austrians continue to build up the defence line in and around the village: 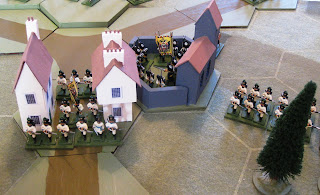 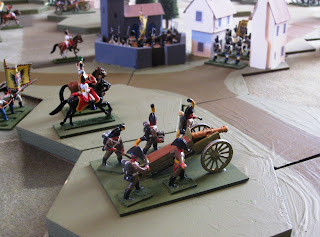 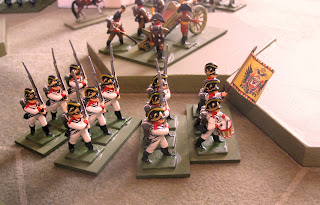 Napoleon orders his heavy artillery to bombard the village: 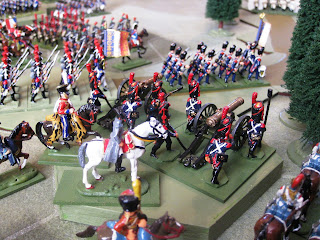 On the Austrian right centre German grenadiers come under fire from French columns supported by artillery and, despite accounting for some of the French, the grenadiers give ground after 50% casualties: 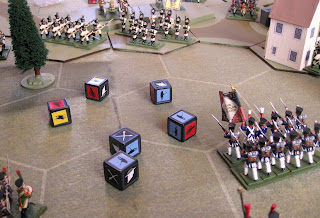 The action now switches to the Austrian left, which is dominated by an old stone walled farm, that is defended by light troops and grenadiers: 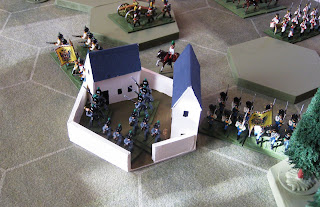 The devastating fire from the farm and supporting grenadiers rips into the Polish column, wiping them out: 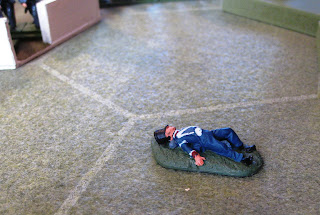 First blood to the Austrian (1 VP), as Napoleon decides to invest in the action on the other flank, until he can amass sufficient strength to take the farm.