Battle of Mons - Setting it up

I plan to play out the Mons battle using my newly painted WW1 figures. I have decided to depict the action that involved the British 3rd Division on 23rd August 1914, when they defended the Nimy salient.  This wide arch in the Mons - Conde Canal had the small town of Nimy at its centre. Just to the south lies the town of Mons. The canal is too wide and deep for fording and can only be crossed at the five remaining crossing points, that are either bridges or locks. The famous Nimy railway bridge lies in the centre of the action (where the first VCs of WW1 were won).

Defending the salient are the three brigades of the 3rd British Division; 7th. 8th. and 9th Brigades. Facing them coming down from the north are elements of Von Kluck's German First Army, in the shape of three Divisions from 3rd Corps; the 6th, 18th and 17th Divisions.

The wargames table below shows the starting dispositions: 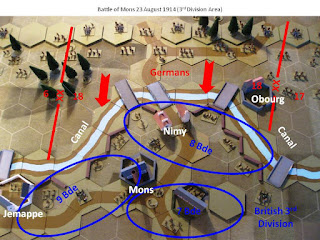 I am going to use Command and Colors rules, slightly modified for the action.  The British will gain from their high rate of fire (15 rounds a minute) and the fact that at this early point in the war the Germans used massed infantry blocks in the attack.  Also the British benefit from being in prepared defensive positions, although not deep trenches.

This should be quite a punch up.