A few months back I purchased a copy of Bob Cordery's Gridded Naval Wargames: 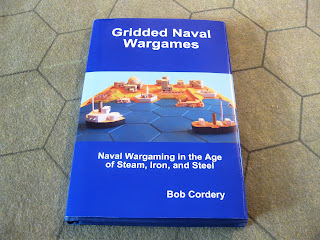 Not really being a naval wargame buff, I was, however, enthused by the simplicity of these rules; so I decided to give it a go.  The rules are really written to play out late 19th and early 20th Century sea battles, but there is enough information for a good WW2 game.

I dug out my old 1/3000 scale ships that have never been used and decided to fight a limited action based upon the engagement between the Bismarck and Prinz Eugen against Hood and Prince of Wales.

The German ships are sailing on a south westerly course off the coast of Greenland, Prinz Eugen leading:

On the other side of the board, heading Northwest is Hood and Prince of Wales:

The two forces sight each other and Bismarck opens fire upon Hood with her main armament at extreme range: 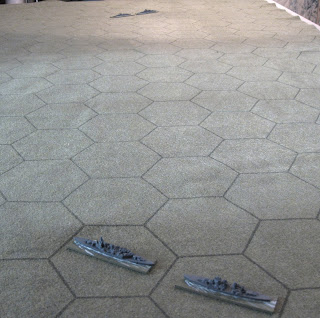 Both sides continue to close the range and the two British warships are able to engage with all of their main armament scoring a number of direct hits on Bismarck. In the same round Bismarck returns fire further damaging Hood.

In the next round the Germans turn to the east. This brings the guns of Prinz Eugen into range; her salvo causing some damage to Prince of Wales. 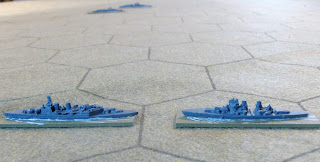 However, both British ships fire at Bismarck again. Having found the range the impact of around 20 shells has a catastrophic effect on Bismarck and she is forced to break off the action.

Covered by Prinz Eugen, Bismarck turns away to the North. Prinz Eugen fires again and scores a few hits on Hood. But, the concentrated fire of the two British battleships pounds Prinz Eugen to pieces. The German ship explodes and sinks: 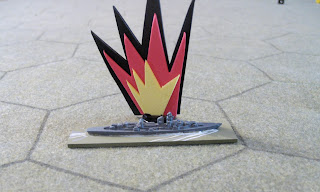 Bismarck is now out of range and with Hood severely damaged the British break off the action. Prince of Wales shadows Bismarck, while Hood turns for home.  The action ends as Bismarck slips away: 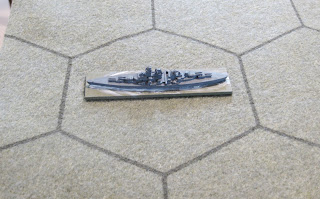 What fun. fast moving and easy to play. I initially thought Hood would sink and the outcome would reflect real events, but it was not to be.