The final box contains more cavalry figures. There are two groups. The first is a unit of old Britains Herald mounted knights. I imagine the serious collectors would turn in their graves if they saw what I did to my veteran figures. Originally they looked like plastic toys, so I slapped on some paint and used some decals that came from Warhammer. Some of the paint is flaking and the transfers are a bit yellow now, but they remain my favourites: 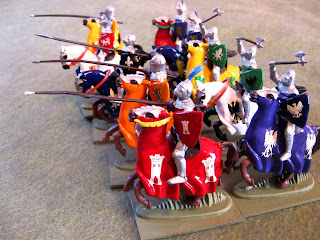 The second group is a load of Britains Deetail silver knights, again tarted up with a bit of paint and transfers on the shields: 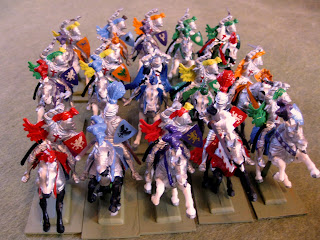 I had to put bases on my cavalry figures as they tumble like dominoes when lined up in close order.

These are the last of my painted and based figures, although there is another box that contains a castle and around 50 unpainted Deetail foot figures that I might get around to painting at some stage.