I have been flirting with the idea of recreating the battle of Mons, or a part of it and was spurred into action when Airfix recently re-released their WW1 infantry sets. I bought some and began painting and basing some units; however, when I opened up the German infantry sets I was shocked to see the amount of flash on the figures. Here is an example: 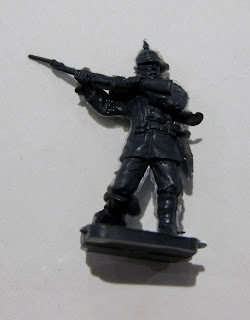 Every figure in three boxes was the same. Cutting flash away with a knife is not easy and so I chucked them in the corner and began to paint some Hat and Zvezda Germans. Now these are lovely figures but are a little large when compared to the British infantry.  Also the Hat set lacks machine guns and gunners with spiked helmets.

Then I remembered an article I read somewhere (it may have been in one of the Airfix guides) that used a hot pin to get rid of flash. The idea is the heat the pin/wire over a candle and run it gently along the flash lines.  This is my flash removal kit: 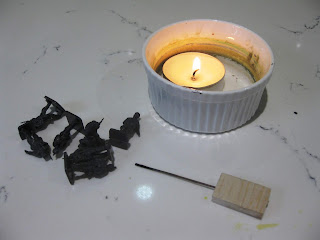 I stuck a piece of wire in a block of balsa - the wire gets very hot!!  After a bit of trial and error and after a few melted guns and bayonets I worked out the correct technique. Whilst not perfect, the resulting figures are not too bad: 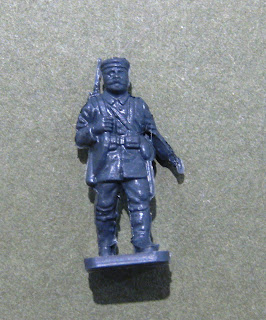 So, painting begins and I should have them completed by the weekend.