Having enjoyed the Waterloo action and built up experience of using the C&C rules, it seemed a good idea to have a go at another scenario. Ligny, which I found on the G&G website, looked inviting and potentially a real slogging match - needing 11 points to win.

It was also a good opportunity to use my very old Prussians, that have not been out of their box for decades!

Here is an overview of the battlefield, which is cut in two by Ligny stream, that loops across the table. The village of Ligny is on the right, with the two bridges: 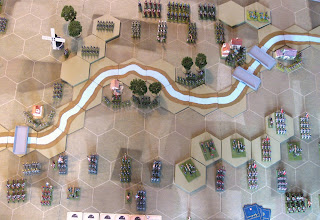 The Prussian defending the top of the field are deployed into a string of villages and woods straddling the stream. The bulk of the Prussian army sits in the centre behind this defensive line. The Prussians are mostly Ros 25mm, supported by a few Hinchliffe and a smattering of Minifigs and Warrior figures.

Looking at the Prussian position in detail, the left flank is held by (old Hinchliffe) Prussian riflemen. across the river opposite Ligny: 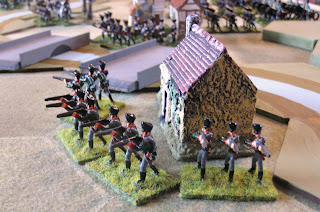 Ligny itself is in the hands of Ros Prussian Line infantry: 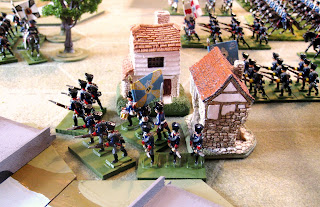 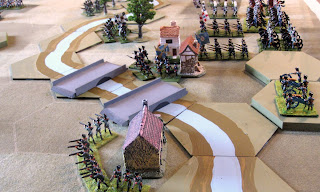 And the village and woods of St Amand have both Ros Prussian line and light troops defending them: 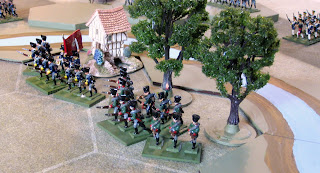 The Prussian centre has the bulk of the cavalry and infantry drawn up in reserve: 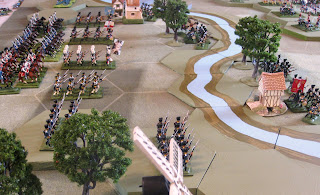 Meanwhile on the left the French have noticed with interest that the village of La Haye is held by Militia (Hinchliffe) - a potential weakspot? 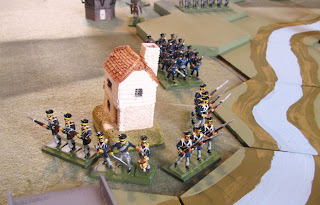 The French forces, made up of a mix of Warrior, Minifigs and a few Ros figures have the bulk of their forces on the centre right. This is where the Imperial Guard is also located: 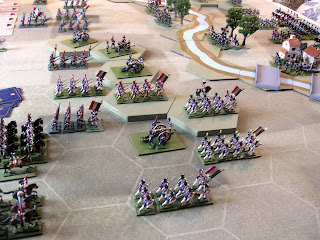 On the left, the French have a good mix of infantry, cavalry and artillery, including the Young Guard: 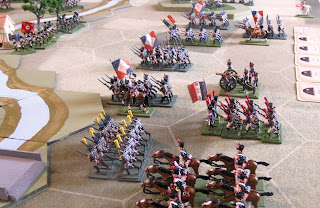 The French have significantly more artillery, with five batteries, as opposed to two Prussian. The stream is fordable, but reduces battle effects and the built up areas are worth two majority victory points - meaning that the Prussian start off with a two point advantage.

This battle will likely be played out over the next couple of days, as time permits. A battle report will follow.