I recently purchased the board bame 'Battle Cry' which is based upon the American Civil War (ACW). I really like the game system, which is similar to Memoire 44 and Command and Colors. That said, I have never been a fan of board games and thus I have decided to play Battle Cry on the wargames table using 20mm figures. I had a huge stock of Airfix ACW troops and I plan to use these.

For the infantry I will need to create 40 stands for each side, 9 cavalry and three guns. I have made a start. Here are my Union forces:

Union Artillery - more than I need for the game 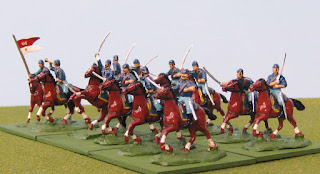 I have also made a start with the Confederate (CSA) forces:

CSA Artillery - again more than enough for the game:

CSA Infantry- I have another four units on the painting table, so more than enough when they are completed: 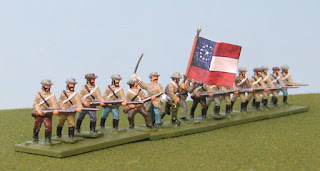 I am also painting some limbers for the artillery and supply wagons.

The table will be laid out the same as the board game using a cloth marked with 5" hexes. Scenery etc will match the game, but will be three dimensional. More updates to follow.