Talavera is a battle that I have long wished to play, using the Command & Colors game system as the basis. I also wanted to play with both the British and Spanish elements on the field. After a bit of searching I found an enlarged version on the C&C website called 'Talevera La Grande Battle':

Will came over this weekend and so the troops were set up on the table.  From the French side: 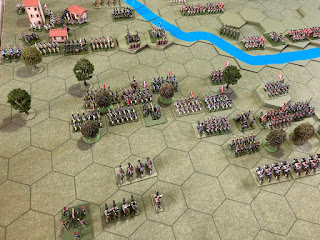 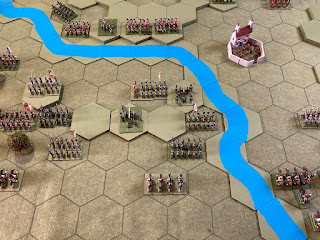 And from the Anglo Spanish point of view: 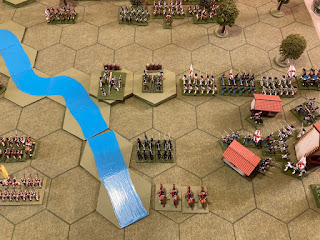 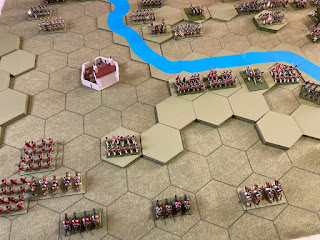 The game was played using our in house rules, using dice to determine initiative and action points. Also, from previous games we added another tweak; units forced to retreat by a flag symbol finish up facing away from the enemy and are classed as disordered until rallied next turn and using up action points. This allowed cavalry to pursue and cut up retreating troops - as I was to learn shortly. We do not use the C&C game cards at all.

I played the French and kicked off by having a probe towards the Spanish side of the field by attempting to attack the two gun batteries on the ridge.  These guns were behind an earthworks, proving to be a real challenge to dislodge: 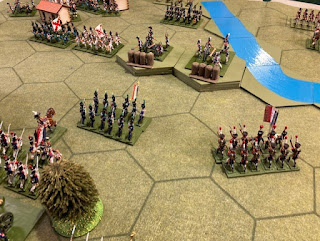 The attack did not go well and the two French battalions were soon retreating having taken some casualties.  The action for this small ridge continued for much of the game sucking more troops from both sides: 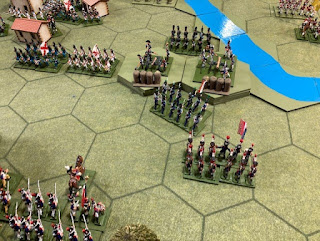 Finally one of the batteries is overcome 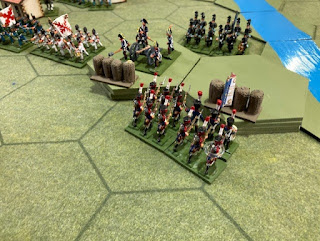 On the opposite flank the British withdrew most of their infantry onto the reverse side of the ridge.  Seeing this the French now made a demonstration against some Spanish infantry in a fortified farm, with light infantry, supported by artillery moving against the buildings: 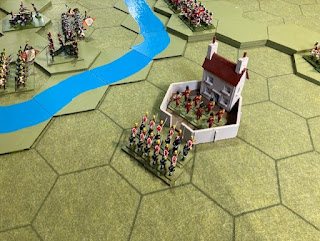 However, this small action grew into a major encounter as both sides poured more assets in. The Spanish were ejected by the French light infantry, who were in turn pushed out by a British battalion.  The French advanced a brigade of cavalry and British cavalry advanced to counter the move, A huge cavalry battle ensued. 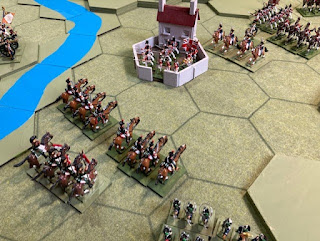 The French were pushed back with the cavalry brigade being all but destroyed. French infantry were also beaten back and the allied left was stabilised. 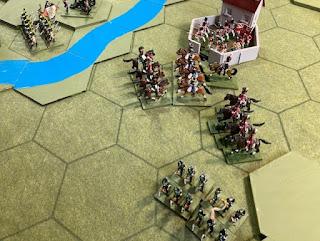 Back over on the left the French continued to push forward against the largely Spanish forces, but once again were beaten back. It took several turns to rally the troops and sort things out: 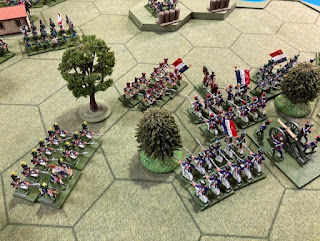 Meanwhile, a pesky regiment of Spanish hussars continually harried the French, cutting up some French light infantry and eliminating a horse battery: 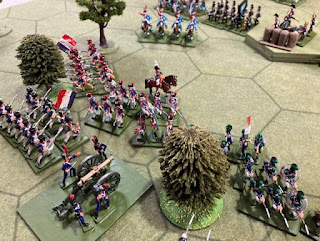 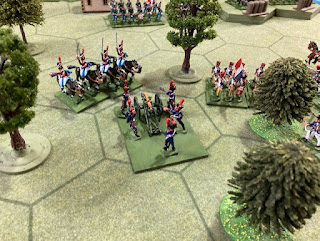 On the opposite flank the successful British cavalry over extended themselves, attempting to ride down a French battery, but the river and hill saw them decimated by musket and artillery fire. 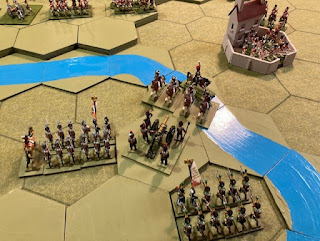 With the British cavalry beaten off, the British infantry advanced forward off the ridge. 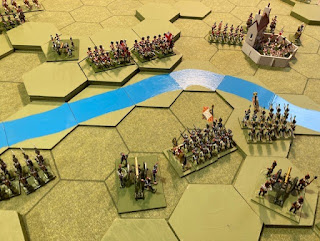 Hoping to take advantage of the disarray caused by the failed cavalry attack, two battalions of highlanders stormed across the river in a headlong charge: 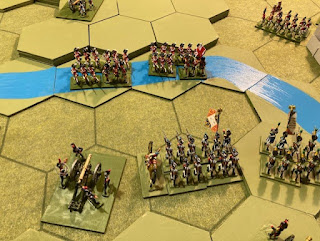 Initially they were quite successful, but rallied French guns and infantry began to cause casualties, especially from short range artillery: 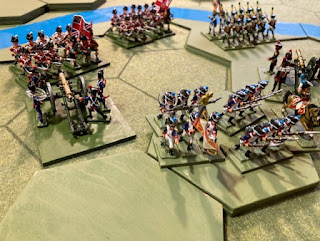 Although one French battalion routed, the highlanders were beaten back suffering severe damage. 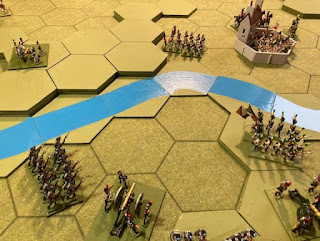 back on the opposite flank the French reorganised for another push forward and although the second gun on the ridge was finally dislodged the Spanish, suffering high casualties held firm: 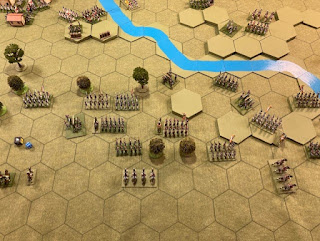 The Spanish pulled back and strongly held the village of Talavera and could not be dislodged: 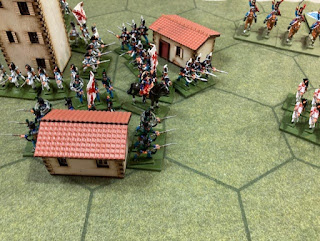 Without making any real progress on the left, French attention shifted back to the right and centre.  Some fresh French battalions began to move against the allied centre which had been weakened by the loss of the highlanders: 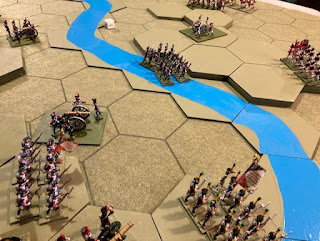 Once again the allied cavalry intervened with a flank attack against a French battery that was causing problems by bombarding the fortified farm.  As before, this attack faltered and the cavalry failed: 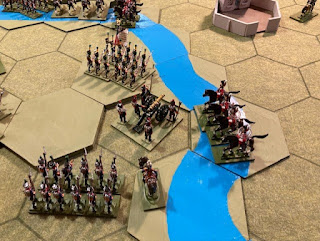 Once more the French pushed on up towards the ridge, supported by cavalry and once again the remaining British infantry and cavalry counter attacked: 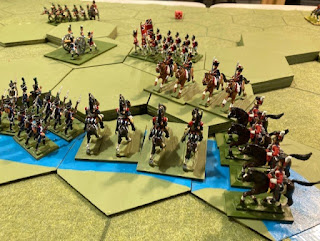 And the French were pushed back across the river, having lost more men and a regiment of cuirassiers: 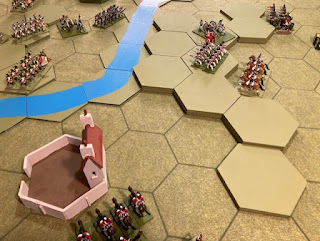 Undeterred, hoping to win by sheer weight of numbers more French troops were pushed up the ridge 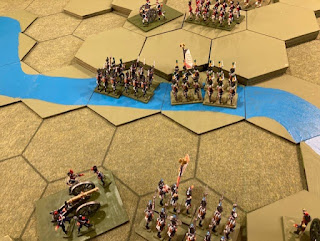 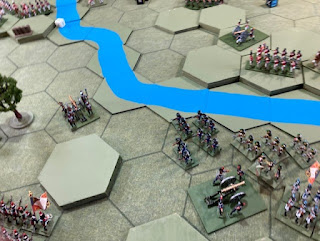 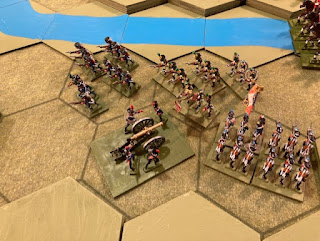 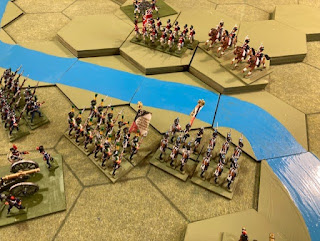 Eventually the French losses became too great and on both flanks they were unable to gain ground, being halted on the river time and again. The French exhaustion point of 15 was reached and an allied victory was declared.  The final score was 15 -13 to the allies.
A final view of the battlefield: This was the largest battle Will and I had fought and it was a lot of fun.  The rule tweaks worked really well and allowed cavalry to be used to full effect. The battle lasted about four hours which was good for such a sizeable action.
We are contemplating another large action in the coming weeks and will continue to put our rules adjustment ideas to the test.
Posted by Bob The Old Painter at 06:46