I am having a blitz on a number of incomplete projects as I am planning a couple of games over the May Day bank holiday.  I have around 25 units to brush up by that date.

Clearing the painting table, I finished off these Bavarian Light Horse from Minifigs S range figures.  The painting was done by Alan, a friendly and kind blog reader, who also converted the figures using British Scots Greys bodies and Bavarian infantry heads.  My contribution was just to paint five of the horses and base them. They do look splendid and will now join my slowly expanding Bavarian army: 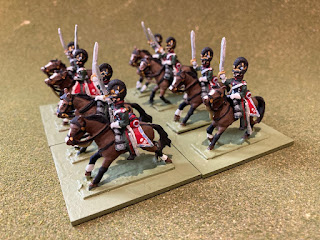 Another little project has been the refurbishment of these two Prussian generals that I purchased off eBay.  One had a broken sword which was repaired using a sliver of baked bean can: 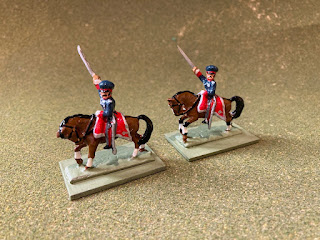 Coming up will be a number of 25mm Anglo Dutch units for a proposed Quatre Bras wargame.