The French advance guard has crossed into Austrian territory and is marching as fast as possible to seize a key bridge.  Alerted to this threat, a small Austrian force deploys across the road to block the French advance with their centre in a small village: 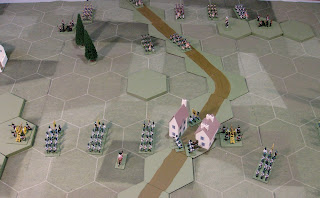 Both sides have seven infantry, two cavalry and two artillery units. The Austrians suffer from lack of mobility and the Austrian General (Me, Bob K) decides to form a defensive line with a hill on the left, the village in the centre and a small wood on the right. 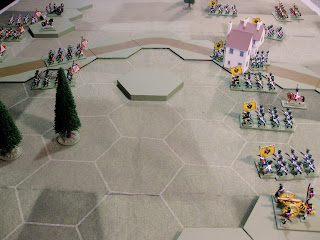 The French (Bob B) adopt an aggressive stance and push cavalry out on both flanks, begin an artillery bombardment and rush infantry up the road in the centre. 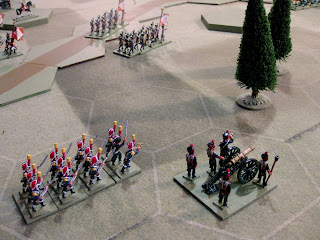 The cavalry battle on the left flank involves Austrian and French Cuirassiers.  This becomes an epic struggle which lasts almost the entire game: 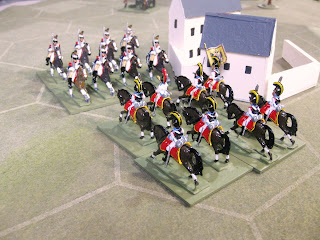 On the opposite flank French allies, Bavarian Light Horse, make short work of some Austrian Hussars and push their way around the Austrian right flank.

While this is going on French infantry reach the village and launch several assaults agains the Austrian infantry and artillery.  Each time they are beaten back: 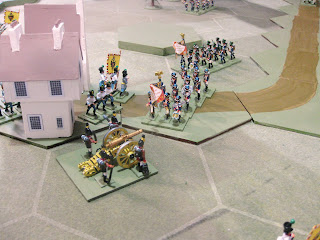 The Cuirassiers continue to slug it out on the Austrian left and the battle rages in the centre, but now free to sweep around behind the Austrians the Bavarian horse become a significant threat. An Austrian infantry unit stands in their way, but fails to form a square and is punished by the Bavarian cavalry: 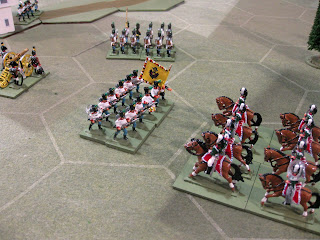 With the Austrian infantry swept aside the Bavarians crash into and destroy an artillery battery: 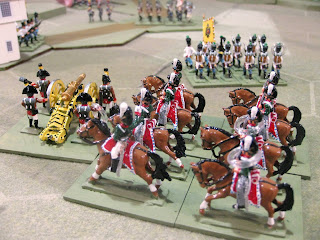 In quick succession the cavalry assault has swept up the Austrian right flank. General Bob B plans the Coup de Grace 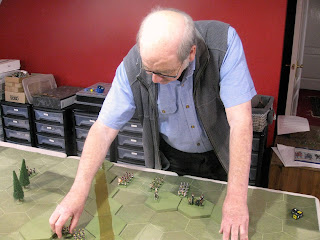 An Austrian infantry unit deploys to block the Bavarian cavalry, forming square and beating the horsemen off: 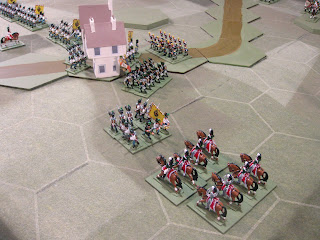 But, the square becomes a sitting duck from French musketry and suffers accordingly. 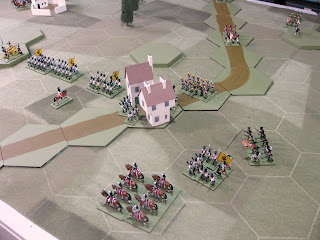 At the same time the Austrian Cuirassiers are finally overwhealmed by their French counterparts and leave the field. The way is open and with the Austrian right completely destroyed, the French gain the road beyond the village The Austrians reach their exhaustion point and concede.  Both sides halt for lunch (pork pie, corned beef rolls and tea), but it is an Austrian defeat 5 - 2.

A great game that hung in the balance for a while, but the Bavarian cavalry changed all of that.

The figures are mostly 25mm Ros Figures, with some Minifigs added.  The Austrian commsnd are all Warrior Miniatures.