This rather strange action is based upon an incident at a remote location on Mackenzie heights, known as Mackenzie's Farm, when the British army blunders into the tail end of Russian Prince Menschikov's field army that had departed Sebastopol to protect Russian lines of communication.

An abridged version of events from Cadogan's Crimea, published in 1856:

............. Lord Raglan followed the road which the artillery had been ordered to take and trotting on, placed himself at the head of the column on the line of march. After proceeding for about four miles through the forset the trees became thinner, and it was evident that we should soon be clear of them.  Lord Raglan had been there for some time wondering that we had not come upon the cavalry, who had been ordered in advance, and therefore sent two staff officers into the wood on our right to try to find them. Two hussars  and a staff officer up ahead reported sighting Russian troops on the road just in front of them. General Airey rode forward with his ADC to see what they were and returned minutes later and announced that they had seen a Russian convoy or troops on the line of march passing northwest along a road at right angles to the one we were on. More staff officers were sent off to find the cavalry and the 2nd Rifles were ordered to hurry up. The horse artillery were ordered to readiness and to advance immediately the cavalry got up.

A contemporary map of the area: 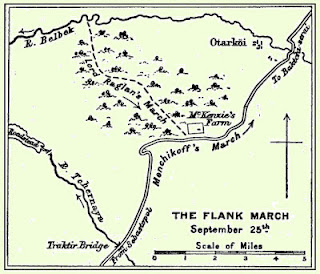 This is where I join the action, with the 2nd Rifles moving forward and the horse artillery deploying.

The board is set up showing the road with the Russian column of wagons, infantry and Cossacks: 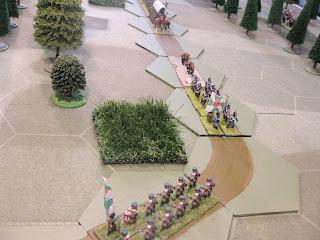 Lord Raglan and his headquarters emerges from the woods: 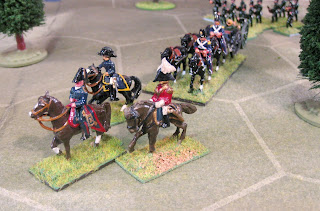 While the cavalry that should have been in the vanguard blunder along the wrong track: 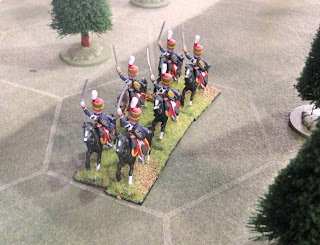 At this point the Russians spot the British and raise the alarm: 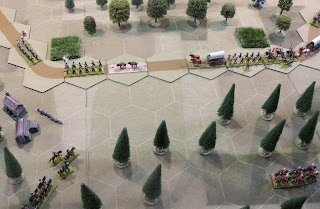 Raglan sends a staff officer to recall the cavalry and the horse gunners move into the area of the farm to deploy while the Rifles move up. However, a Russian battlaion deploys across the British front and begins firing at the British artillery: 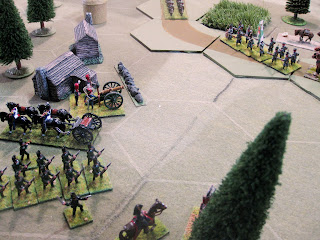 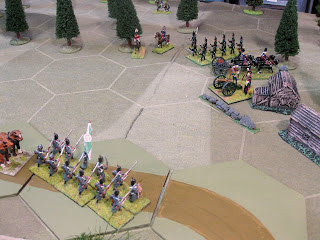 In this battle the Russian continually gain the initiative, while the British are in chaos. Russian musket fire starts to topple the British gunners and a regiment of Cossacks deploys to support their infantry:

The Cossacks charge the rifles who while deploying into line manage to loose off a volley into the Russian cavalry, but the Cossacks make contact with the British infantry: 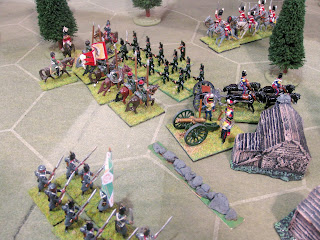 The Rifles are cut down and break and run off into the trees.  Meanwhile the Russian infantry close in on the horse artillery in the farm and cut the gunners down.

As all this was going on the Scots Greys arrived having newly arrived in the Crimea and having missed the Battle of the Alma were keen for some action.  They charged headlong into the Cossacks sending them packing: 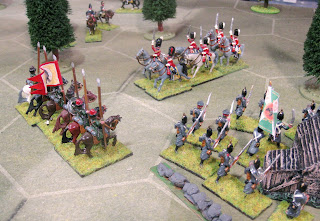 However a second Russian infantry regiment had deployed to the front of the Scots Greys and the Russians, now in the farm, began pouring volleys into the exposed British cavalry.  Casualties were heavy and the Scots Greys retreated back down the road: 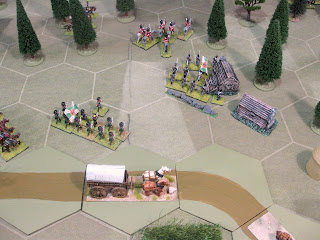 With the British beaten off the Russian columns and wagons were able to move off unmolested and the action was over.

A clear win for the Russians!

In the real action, which saw the British commander through error being at the point of the column,  the Russian battalion loosed off a volley or two which went over the heads of the British with no effect.  The artillery and rifle fire caused the Russians to turn on their heals and they fled. Little more happened and the British captured the wagons, tons of supplies, some drunks and a lot of loot, although a few Scots Greys were killed by Russians that played dead amongst the baggage.

The figures used are S range Minifigs, originally from the Alan Cook collection. Rules were adapted from C&C Battlecry.