B Company's Grand Day Out

B Company (B Coy) has been tasked to provide infantry support to British armour planning to move along the road through quite close country.  B Coy has four platoons and a headquarters and has a mortar section and medium machine gun section attached.  The tanks are represented by four Shermans. The ground is as follows; beyond a low ridge there is a village on the right by the road junction, a patchwork of fields and a small wood on the left: 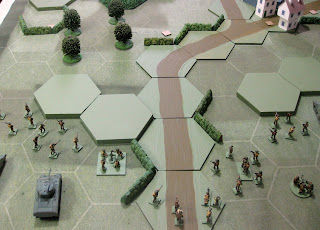 On the left, 1 and 2 Platoons (Pl) are to advance and clear the wood, with two tanks in support, while on the right, again with two tanks 4 Pl will move up to the village.

In this game there are no enemy on the table, which consists of elements of a panzer grenadier battlegroup, just a series of square markers.  Once troops are within 2 hexes they can dice to see if they spot what is there (if anything).  If something is spotted, 2 D6 are rolled to determine what it is. This provided quite an exciting game.

1 and 2 Pls begin their advance on the wood: 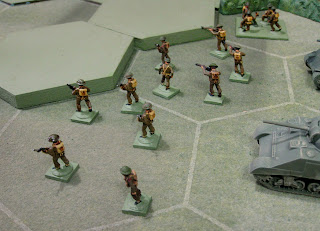 Once on the other side of the ridge they spot movement behind the hedge near the wood.  To their horror this turns out to be a Panzer IV, which begins firing at them: 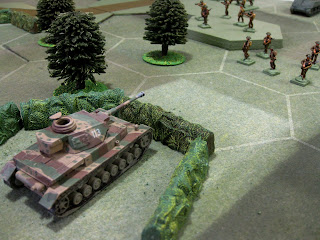 1 Pl in the direct line of fire runs into the wood for cover, while one of the Shermans advances to take on the German tank: 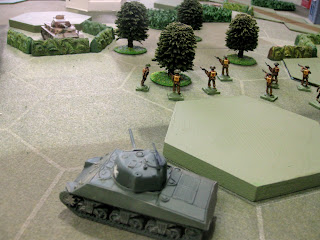 Both tanks exchange fire to no effect, and the arrival of the second Shermans sees the Panzer IV pull back out of view. 1 Pl consolidates its position in the wood, with 2Pl on its flank.  A second suspected German position to the right of 2Pl turns out to be a false alarm.

The action now switches to the right flank and a Sherman moves onto the ridge to cover the advance of 4 Pl.  There is a marker in the village, which turns out to be a Pak 40 75mm anti-tank gun: 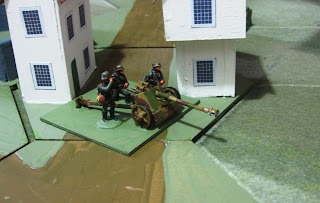 The gun opens fire and the Sherman is destroyed: 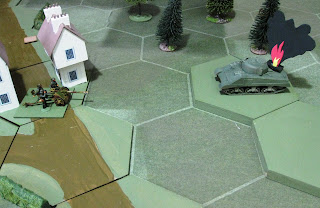 The supporting infantry of 4Pl make short work of the anti-tank gun and they enter the village: 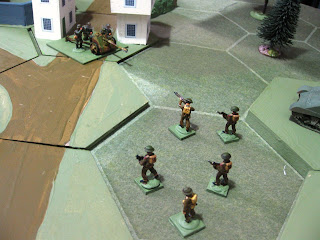 As 4 Pl move into the village they spot a panzer grenadier platoon at the other end: 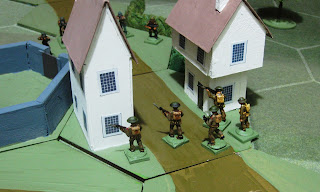 A brisk firefight ensues in the street: 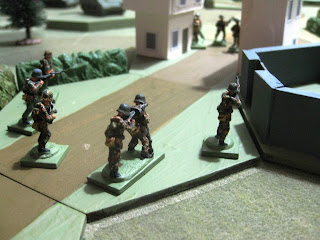 4 Pl win the firefight killing several of the Germans, but also take a couple of casualties themselves. The remaining Germans withdraw when the second Sherman begins to edge around the village, leaving 4Pl to lick its wounds and consolidate in the village and church.

Back over on the left, 1 and 2Pls begin their advance towards their secondary objective, White Farm, which, after testing, turns out to be occupied by a German tank hunting platoon: 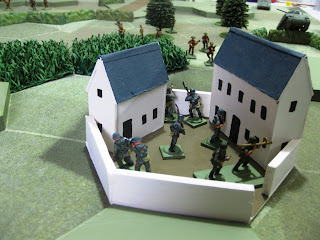 1 and 2 Pls begin their attack, while one of the Shermans moves around the side of the farm: 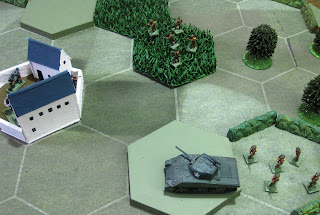 2Pl comes under heavy fire in the field, while 1Pl advances behind the Sherman. Unfortunately the Sherman strays too close to the farm and is taken out by a Panzerschreck: 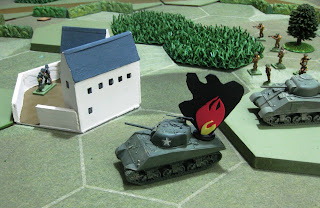 The second Sherman arrives and quickly deals with the Panzerschreck team, but 2 PL has to withdraw due to heavy casualties. To make matters worse, as 1Pl begins its assault, the Germans put down a mortar stonk, which slows things up even more: 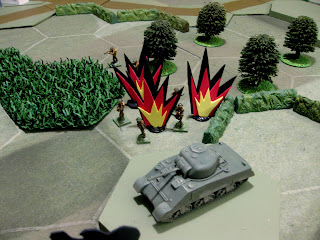 However, the weight of fire from the tank and the infantry overwhelms the German defenders, who break and run.  1 and 2Pls combined set up a defence around the farm, with the remaining Sherman: 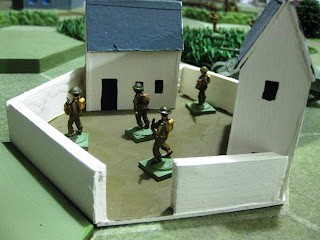 With the vallage and the farm secured the remainder of B Coy moves up: 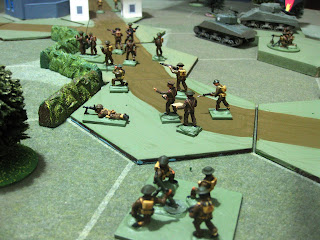 B Coy commander is a little shocked by the level of resistance and determines that with half of the tanks knocked out and only one complete platoon remaining his best course of action would be to hold what he has gained and await reinforcements.  This will make an interesting second game.

All the figures are Hinchliffe 20mm castings and the Tanks are by Armorfast.  I really enjyed this small action, which provided a fairly unpredicatable enemy.