Look What I Found!

Today I was ordered out to find the steam cleaner, with the task of giving the showers a good clean.  I had not seen the cleaner for years, but was sure it was in the garage.  I soon found the steam cleaner box and proudly took it in to the kitchen to dig out the contents.

To my surprise there was no steam cleaner in the box but some boxes of figures and a few other bits and bobs, but at the bottom I found these two boxes: 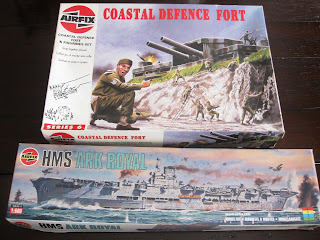 Now, I knew that I did not have a kit of HMS Ark Royal, that was constructed years ago and stored elsewhere as it did not fit in the box once made up.  I was totally blown away by the contents: 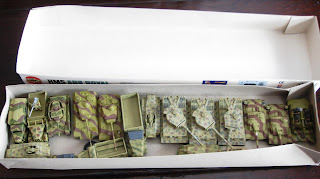 I have not seen these vehicles, which are all 1/87th scale Roco Minitanks, for over 15 years; in fact I had long written them off as being lost in our last house move in 2006.

The second box also contained a very nice surprise, not a coastal defence fort, but a load of Allied vehicles, again mostly by Roco Minitanks: 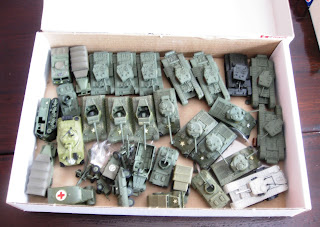 Again, I had given up on ever seeing these vehicles again. Who would have thought to look in the steam cleaner box?

I eventually found the steam cleaner, tucked in the corner covered in dust and cobwebs. I gave it a rapid clean before presenting it to SWMBO!
Posted by Bob The Old Painter at 05:45