The Action at Wilkin's Farm

The idea behind this battle is heavily influenced by the defensive action fought by Buford's cavalry during the first day of the battle of Gettysburg; in that I have a key ridge line and farm being held by two Union cavalry regiments to allow time for the union army to deploy.

In my battle the action starts with two regiments of Union cavalry, armed with carbines and supported by a light artilley battery. They have been deployed as patrols have identified a massive Confederate force approaching along the turnpike. The cavalry have been ordered to prevent the capture of the ridge at all costs.

The cavalry is deployed dismounted, with one regiment on the left holding a wood, the fence line and Wilkin's Farm itself: 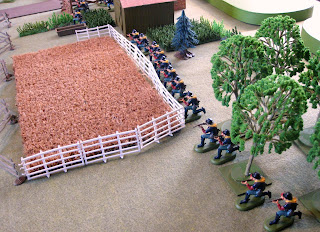 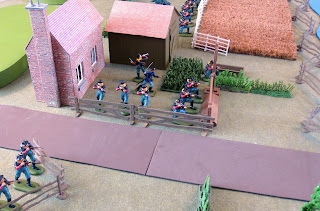 On the Union right the second regiment, with the artillery, holds the fence line and unfinished railway: 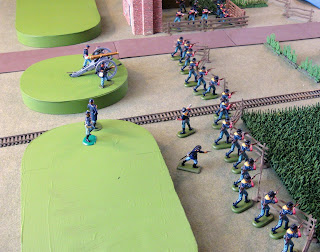 For this battle, I decided to have another go at using Donald Featherstone's Horse and Musket rules. For troops I used mostly Britains plastics, with a few from other firms thrown in to make up numbers. Some are almost as old as me!

I rolled dice to determine when the main Union force would arrive and this turned out to be after 12 turns. Looking back to my last action with these rules the battle was over in around six turns!

The action begins with an unsuspecting Confederate regiment being pushed forward to clear the farm and carry out foraging for the main army. They believe the enemy to their front to be a few poorly trained and equipped militia from the nearby town: 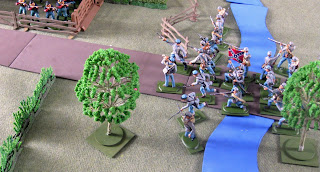 They are in for a shock and come under a hail of fire from the farm to their front and the fence line on either flank as the Union cavalry open up with repeating carbines. The Confederate losses are horrific: 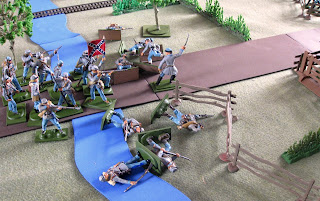 Despite attempting to deploy into line and return fire the Confederate column is decimated and falls back: 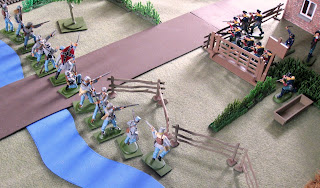 There is now a lull in the battle, but on move five the Union cavalry can see masses of grey and brown uniforms; as the Confederates deploy a Brigade of three regiments into battle line. In the centre the first rebel regiment makes a dash across the stream: 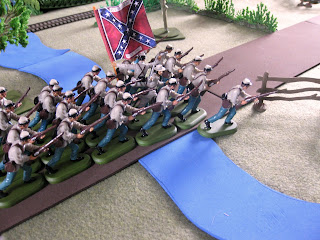 While on the left an Alabama regiment in butternut approaches the corn field in front of the Union right: 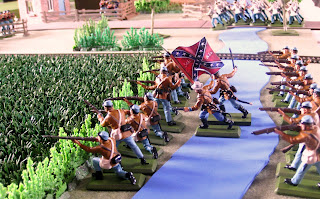 While intent on sweeping around the Union left through the woods, another regiment fans out: 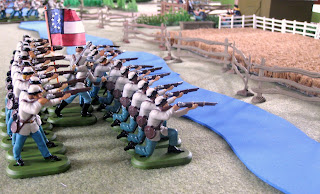 The action picks up around the farm once more as cavalry carbines rip into the rebel ranks and after a brief but bloody action the centre Confederate regiment pulls back: 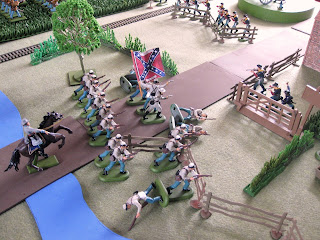 Although this assault is blunted the cavalry in the farm take several casualties and are weakened. This episode is followed by a rebel assault onto the Union left, through the wheat field. Initially the Confederates take heavy casualties, but do not break. They establish themselves behind a fence and begin to wear down the Union cavalry in a firefight that lasts three turns: 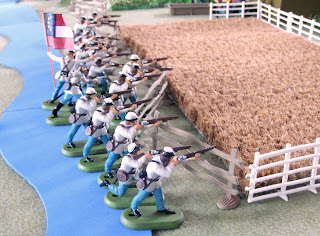 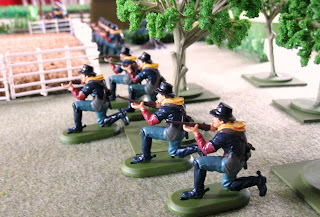 Eventually the weight of confederate fire forces back the Union cavalry in the wood and on the left : 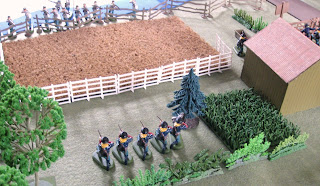 On the Union right the Alabama regiment steadily advance, and some poor shooting by the Union cavalry and artillery allow them to reach the fence line. The hard pressed cavalry are forced back up the slope: 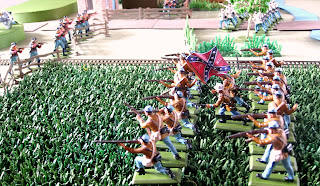 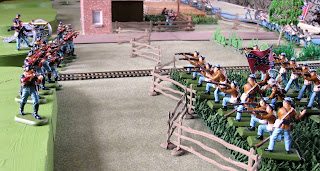 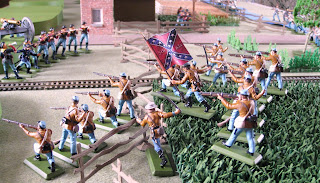 With dwindling numbers the Union troopers are forced to retire and form a small knot around the artillery. By move nine it is largely over, when rebel rifle fire silences the Union gun. The morale of the cavalry breaks and they withdraw back beyond the ridge.

The Confederates have been severly mauled, however, they have driven the Union forces from the field and it will be a full three turns before any Union infantry will arrive, leaving time for the Confederates to consolidate on the captured ridge. So a victory for the rebels.