I haven't posted for a while, largely because I have been head down with a new project.  This came about quite unexpectedly.  Some may have read the Wargames Odyssey blog, which back in early October announced that David (DC) had decided to shed his collections and focus on naval actions and land games based on the WoFun 2D plastic figures.

Part of this process involved selling off his figures to raise capital for his new projects.  One of the items going was his Spencer Smith ACW collection.  Some will also know that I painted all of the figures in the collection over a period of around two years.  I had become very fond of the figures as I was painting them, so jumped at the chance of acquiring them.  So, a few weeks ago a big parcel arrived containing the collection, loads of movement trays and some unpainted figures. It was fun unpacking them and seeing these lovely figures once more.

Over the last 3-4 weeks I have been painting and basing the existing collection as well as two units of skirmishers and a further CSA regiment.  Last night I finsished off this work.  My unit organisation differs from DCs, going for 20 figures per regiment.  This entailed painting four new command groups too.

My plan is to fight an old school style battle in the coming days.  In the meantime, here is a picture of the completed confederate army: 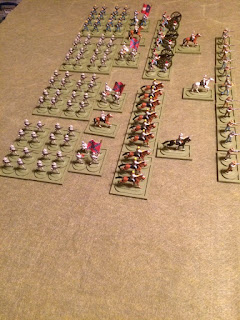