Into The Valley of Death

Following the charge of the Heavy Brigade, the action of the Thin Red Line and the withdrawal of the Russians back across the North Valley, the allied staff, high above on Sapoune Ridge, observe the Russians removing the heavy naval guns from the fallen redoubts on the Causeway Heights. Lord Raglan decides to take action to prevent this and writes a series of three confusing orders to Lord Lucan, the commander of the cavalry. The third and last order said:

'Lord Raglan wishes the cavalry to advance rapidly to the front and try to prevent the enemy carrying away the guns' Troop of horse artillery may accompany. French cavalry is on your left'.


Of course neither Lucan nor the commander of the Light Brigade, Lord Cardigan, could see what was happening higher up on the Causeway Heights. The only guns visible to them were those in the Cossack battery sitting at the other end of the north valley.  After some protestation and discussion, Lucan orders Cardigan to carry out Raglan's wishes - with disasterous consequences. Instead of turning right up onto the Causeway Heights, Cardigan leads his Brigade straight down the valley.

Here is an overview of the north valley. The Light Brigade is to advance down the valley to destroy the Cossack Battery. As can be seen there are infantry and guns on both sides of the valley and large numbers of cavalry behind the guns  and to the left: 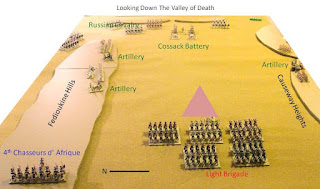 A report of the battle is to follow.
Posted by Bob The Old Painter at 14:44